QUATUOR BOZZINI/PHILL NIBLOCK ‎- BAOBAB (CD by Quatuor Bozzini)PHILL NIBLOCK – THE DORF (2CD by Experimental Intermedia/Umland Records)As I was reading the information onthe cover ‚The Dorf‘ by Phill Niblock, I noticed that one of the pieces was ‚Baobab‘ and I thought I reviewed that before. I hadn’t. I got a notification about a CD (with a download link) that a CD was coming from Quatuor Bozzini, playing two Niblock pieces, ‚Disseminate As Five String Quartets‘ and ‚Baobab‘, and I downloaded it (this all early 2019), waiting for the CD to arrive. It sunk away on hard drives, as these things go, I guess, but the title stuck. What is interesting here that on ‚The Dorf‘, which means ‚The Village‘, thirty-eight players on many different instruments perform ‘Baobab’, but with the Quatuor Bozzini version, it is a string quartet. Phill Niblock is, for me at least, one of the masters of minimalism creates dense works of heavily layered sounds that only seem to have the most minimal variation. Sometimes he composes for a single instrument, but which requires to over 1000 layers, with all the attack cut off, so there is a massive drone as a result.‚Disseminate‘ and ‚Baobab‘ are orchestral pieces, and Quatuor Bozzini recorded multiple takes, so it sounds like there are five string quartets at the same time. In both of these pieces, it is very clear what Niblock’s idea is with his music, especially when, as instructed, to play this with some considerable volume; an all-immersive piece of music from which no escape seems possible and which allows for microscopic changes The violins are shrieking as hell and there is a dark drone-based undercurrent at work here. You can’t escape! Two times twenty-two minutes of pure aural bliss. If this is already powerful, how does it work out for thirty-eight players?    I thought for a moment that ‚The Dorf’ was a village somewhere in Germany or Austria, where musicians went on a camp and then had this great idea of playing ‚Baobab‘ by Niblock. That is not the case. The Dorf is an ensemble of twenty-five musicians (or more) that have been going since 2006 and has the idea of thevillage playing together, only limited by the size of the stage. There are other releases, which I haven’t heard by what Discogs called ‚a large avant-garde jazz ensemble‘. As I am not playing these two versions of ‚Baobab‘ back to back, I have no idea if my volume settings are the same as before, but somehow more musicians playing doesn’t multiply the all-immersive character of the music; in fact, I am not entirely sure here, but it seems to be all q bit more subdued. There is a difference in instruments being used here, lots of stringed ones, wind instruments, but also various synths, computers, bass, drums, sampler and so on. The music is still a massive force to be reckoned with, and none of the instruments leaps out; there is no solo here, obviously, but all of them stay remarkably close together in the forty-six minutes this version lasts. On the other disc, we find three pieces composed by Jan Klare, who is also the conductor of the group. Maybe I get, as someone who hasn’theard other music by The Dorf before, a notion of what they sound like, otherwise? The wall of sound approach that Niblock has is further expanded here, but with a much different mindset. Now it is everybody on their own, and instruments are now recognizable. I would think the three pieces are partly composed and partly improvised. There is the chaos versus order to be found in these pieces, with hectic phrases being repeated over and over, while others have a freer role to fill. In ‚Split‘, the final piece played that evening The Dorf sounds like fanfare on speed playing the minimal music but something goes very much wrong, but the conductor keeps the train back on track and allows it to thunder on. I was reminded here of something like Hoketus, which to me sounded like a similar ensemble. (FdW)––– Address: https://quatuorbozzini.ca/––– Address: http://experimentalintermedia.org/––– Address: http://thedorf.net
Vital Weekly 1234

two records going to come out pretty soon. below the bandcamp links.

1st one is a double CD by our mother orchestra „the dorf“ – it is called „baobab/ echoes“, here is the first pre-review in Italian. https://umlandrecords.bandcamp.com/album/baobab-echoes

2nd one is the CD by Hilde –  great band set up by four very talented women from the same orchestra.  https://umlandrecords.bandcamp.com/album/hilde 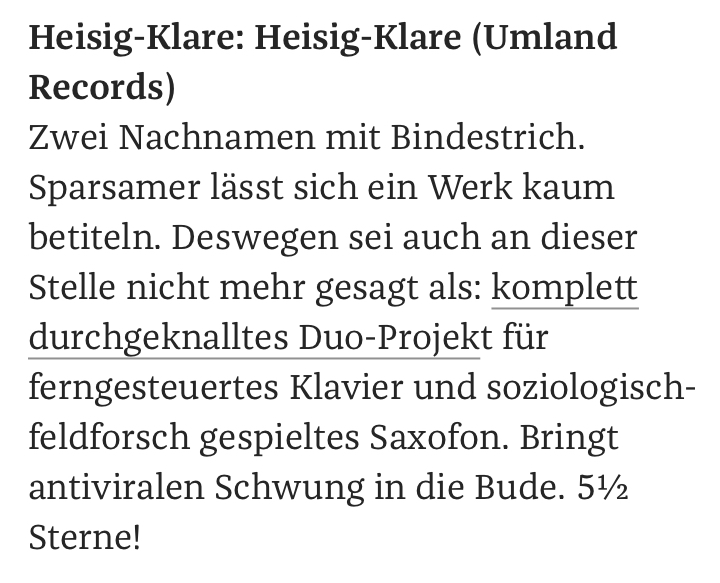 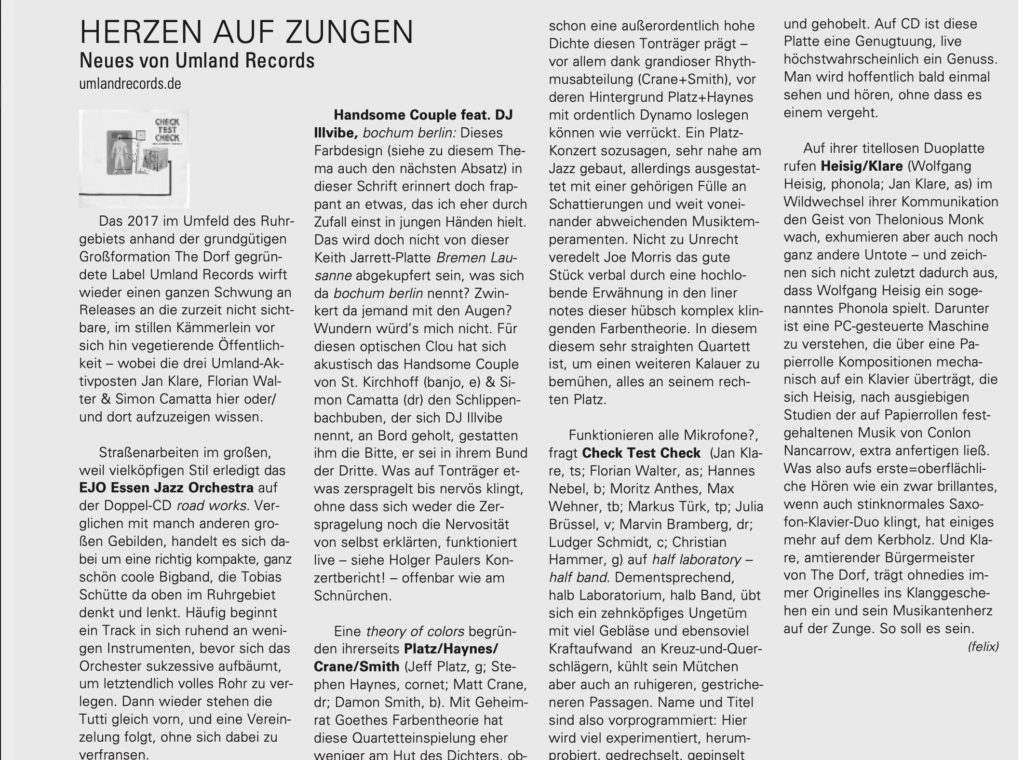